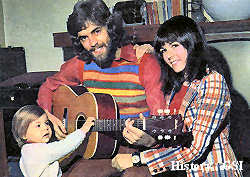 Geoff Bridgford is a singer songwriter who started his musical journey as a drummer in the mid sixties. After being inspired by the British and US music invasions in the early sixties Geoff started playing drums in a band with some local school mates. By 1966 the desire of pursuing music full time kicked in when he joined a new band on the Australian music scene ‘Steve and the Board’ (who had a hit single with ''Giggle-Eyed Goo'' when he joined).

In 1967 Geoff joined The Groove another new band on the Australian music scene. The Groove based their sound around a robust R&B/soul ethic that proved sensational for Aussie audiences at the time and they became one of Australia’s most popular groups with a string of hit singles and a self titled album. They won the coveted first prize in the Hoadley’s National Battle of the Sounds competition in 1968 (A trip to the UK and recording time at Abbey Road studios) When The Groove left Australia in 1969 they were certainly one of the most respected bands of their time but failed to create the same interest and success they had experienced in Australia and after about a year in the UK broke up.


It was in London in 1970 while playing drums for UK based band Tin Tin that Geoff started recording with the (reunited) Bee Gees (After their initial rise to fame in 1967/68 the Bee Gees broke up in 1969 and the brothers reunited in 1970). Geoff was asked to join the group following the release of the 'Two Years On' album. He toured internationally with the Bee Gees and played on songs that were released on four albums, eight singles and received Gold records for the million selling hits ''Lonely Days'' and ''How Can You Mend A Broken Heart'' (the Bee Gees first number one in the USA) The early seventies period is well documented in Bee Gee biographies as a tumultuous and uncertain period for the brothers and by mid 1972 Geoff had decided to leave the group.

In 1974 Geoff started playing drums with a group of musicians in Melbourne  that evolved into a band called One Foundation. Over the following eight years the bands unique destiny unfolded which included various line-up changes and international performances through Europe and the USA. Between 1977 and 1982 One Foundation released seven albums on cassette (pre-CD) and none of those releases were ever re-mastered for CD or transferred to a digital audio format and along with one final CD release that did surface in the early nineties all of One Foundations recordings have now virtually disappeared into the fog of the past. 'The GB Archives Vol.1' compilation album came about partly from requests Geoff has had over the years to make available some of the songs he recorded during his time with One Foundation.

In 1976 Geoff was approached by Indigo Records based in Melbourne to record a solo album. The album was recorded at TCS studios in Melbourne and co-produced by Geoff and recording engineer John French. Due to the closure of Indigo Records the album was never released but two (vintage) promotional video clips have surfaced and four of the songs recorded for the album have been included on the 'GB Archives Vol.2' compilation.

In 1982 Geoff returned to Australia after living overseas since 1977 and started playing drums for Mark Gillespie who was a highly respected Australian singer songwriter. By the time Geoff arrived on the scene Mark had already released two successful albums. On his third album ‘Ring of Truth’ recorded in 1983 Mark played all the instruments with Geoff on drums and R&B soul vocalists Renee Geyer and Venetta Fields on backing vocals.

For a few months in 1983 Geoff had the good fortune to be asked to play drums for the Australian band Goanna, they’d had a hugely successful Album ‘Spirit of Place’ that integrated social protest with popular music and from the album came a massively popular single ''Solid Rock'' which directly addressed the plight of the Aboriginal people and their culture. When he was with the band they were road testing and recording demos of new songs for what was to be their follow up album ‘Oceania’. It was an amazing personal journey for Geoff to be on the road with this group of musicians who helped him cultivate a deeper understanding of the aboriginal people and their culture and his own personal spirit of place as an Australian.

In 1984 Geoff moved to Byron Bay to take some time away from the virtually endless non-stop international travel and touring he’d done since 1966. During his time in Byron (1984 -1988) he started to focus more on the singer songwriter aspect of his musicality. Apart from short tours in 1986 with Venetta Fields ‘Gospel Jubilee’ and Mark Gillespie he played drums with local band Hip Pocket’ and became semi-resident session drummer for various recording projects at the then famous Music Farm recording studios located in Coorabell just outside Byron Bay.

In 1988 after re-locating to Melbourne  Geoff started playing solo singer/songwriter gigs, he also played drums with Ross Hannaford (ex-Daddy Cool) they were a popular duo (guitar and drums) on the local pub/club circuit. In 1989 Geoff recorded an EP 'Modern Life' but it didn’t see the light of day until digitally released in 2014. From 1991 until 2000 Geoff was the musical director for a video production company based in Los Angeles CA USA. Since returning to Australia in 2000 Geoff has worked off and on with Australian singer songwriter Kim O’Leary In 2012 Geoff released his first solo album ‘Another World’. 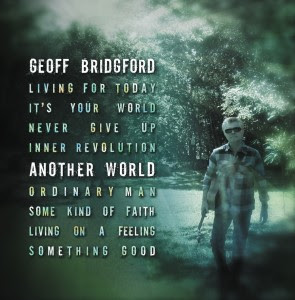