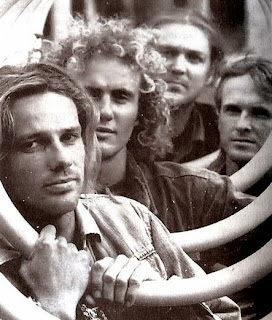 Australian skate-punk/hardcore band, active since 1986, The Hellmenn came blasting out of Sydney's northern beaches skate punk scene like a rocket from the tombs of hell. The bands fierce sound mixed Black Flag with Black Sabbath by the way of an environmental manifesto. The bands original image was of a drug-crazed surf punks looking for good times and loud rock'n'roll, which said more about a desire to create mayhem as opposed to creating great art. On the other hand, singer Ben Brown was also well known for his grotesque, demented artwork which was an extension of the bands frantic approach to music making. The Hellmenn signed to the Waterfront label and issued the hardcore mini-albums 'Herbal Lunacy' (December 1987) and 'Barstard Sons of 10 000 000 Maniacs' (November 1988).

The second was populated by such unhinged characters as the 'Tripping Priest' and 'Sluggo'. Yet, among the chaos, there was some semblance of order. The title 'Herbal Lunacy' for example reflected the band's interest in herbal medicine (Hopkins is a qualified naturopath). The band contributed a cover of ''Search and Destroy'' to Au-go-go's Stooges tribute album 'Hard to Beat' (1988). In 1989, Victor Levi (ex-Ratcat) replaced Tony, and the band supported American Hardcore god-father Henry Rollins on his Australian tour. The Hellmenn issued one single during 1989, ('Daydreaming'/'The Trip'), after which Levi left the band. A year later, The Hellmenn issued the album 'Mourning of the Earth' and the single ''Anyone'/'Possum's' (May 1990).

The album featured a mellower set of songs, and the title was a pun highlighting the seriousness of the worldwide environmental issue. The Hellmenn contributed a cover of  ''The Deuce'' to the 'iss tribute album 'Hard to Believe' on the Waterfront label (1990). The band's last release for the year was the single ''Homegrown'' (December), which had been lifted from 'Mourning of the Earth'. Around the same time, Bill Gibson (ex-Invalid Artist) joined on Guitar. The EP 'Electric Crazy Land' (October 1991) boasted a broad range of sounds, from Hendrix-like psychedelia to Sonic Youth-styled noise. The description 'sonic surf sounds' was an appropriate one.

The band, however, had fallen into a rut and broke up at the end of the year. A few weeks later, Brown, Hopkins, and Heald revived The Hellmenn with new member Ken Archibold on bass. That line-up appeared on the bill of the inaugural Big Day Out (January 1992).  The band then signed to Phonogram's development label Id, which released the CD EP 'Meltdown' (September 1992). The EP mixed three studio tracks with three bonus live cuts. The CD EP 'Absolute Filth' (June 1993) was another strong studio release (described by the band as 'thermo-nuclear-sonic-burnout'). Although The Hellmenn had progressed over the years, they continued to be dogged by references to their skate/surf/thrash beginnings. After eight years of noise making, The Hellmenn called it a day in April 1994. 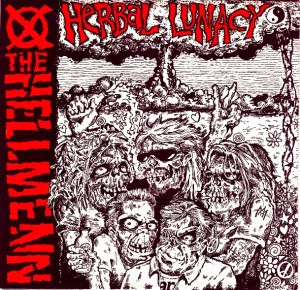