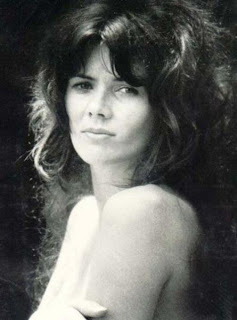 Bobbi (who was born Roberta Turnbull) grew up in Tasmania and left home at 14 and for the next few years she performed with various bands in and around Hobart, where she soon earned a reputation as the best female rock singer in the state. She eventually moved to Sydney in 1971 where Bobbi's first gig was at Sammy Lee's Cheetah Room with the band Southern Comfort in which she shared vocals with Andy Anderson (ex The Missing Links). The band lasted about a year when Anderson left to join the cast of Hair. She then joined Grapevine and then Hunger led by guitar virtuoso John Robinson (ex Dave Miller Set, Blackfeather) who were at the time the house band at Jonathon's Disco in Sydney. They recruited Bobbi as lead singer. In early '72 several Hunger members hooked up with producer-singer-songwriter G.Wayne Thomas, who had recently made his name with production and songs for the hugely successful 'Morning Of The Earth' soundtrack.

Bobbi, John and Steve Webb became the core a new "supergroup" called Duck, with the lineup completed by renowned jazzer and session pianist Bobby Gebert (who worked with many well-known rock bands including Tully), bassist Teddy Toi (ex-Aztecs, Fanny Adams, Wild Cherries and percussionist Larry Duryea (ex Tamam Shud). Thomas originally intended Duck as a 'studio-only' project, featuring only cover versions of songs by major overseas acts. No doubt this was to maximise his own earnings on the album (and presumably the group were only paid session rates). They recorded 16 tracks at Melbourne's TCS Studios, although only 12 were eventually released.

Singer Jon English (ex-Sebastian Hardie) performed lead vocals on several songs, alternating with Bobbi. The resulting LP, 'Laid', released in July 1972, was a mixed bag, but included some strong tracks including Neil Young's ''Southern Man'', Bill Withers' ''Ain't No Sunshine'', Frank Zappa's ''Dog Breath'' and Nick Gravenites' ''Buried Alive in the Blues''. Two Duck singles were issued -- the first, ''Sweet Inspiration/Southern Man'' came out before the LP in May 1972, followed by their version of Paul McCartney's ''Maybe I'm Amazed b/w The Man in Me'' in September.

Encouraged by the results of the project, the core members of the band decided to become a permanent outfit and hit the boards. But by the time they premiered as a live act, Jon English was already ensconced as 'Judas' in Harry M. Miller's production of Jesus Christ Superstar so his place was taken by former Wild Cherries lead singer Danny Robinson for touring . Guitarist Russell Smith (Company Caine, Mighty Kong) also toured with them. According to contemporary reports, the group suffered from the all-too-familiar management woes, and both Bobbi and John have confirmed that the group's relationship with G. Wayne Thomas was part of the problem.

Clearly this was not an isolated incident, since it is known that the members of Tamam Shud, who featured prominently on the Morning Of The Earth soundtrack, were never paid for their contributions to that album and have never seen a cent from it to this day. When Bobby fell ill in late 1972 she went into hospital for an appendectomy and when she came out, Duck had folded. In early '73 Bobbi -- like her friend and colleague Allison McCallum -- came to the attention of flamboyant English impresario Simon Napier-Bell.

Under his guidance she signed with Alberts and cut the first of a string of pop-soul singles for Albert Productions. ''Working My Way Back To You b/w I've Found My Way'' was first in March '73 (note: the A-side was an original Vanda-Young song, not the Spinners classic); next came ''Show And Tell / Voodoo Woman'' in November. Her 1974 releases included ''You're The Hand That Feeds My Love / London Town'' in March '74 and ''Home / I Love You Lord'' in August. While they were all well-made records, produced by the winning Vanda-Young team, Albert's gave relatively little attention to their female artists and none save Cheetah and Allison McCallum had any significant chart success.

However they did serve as Bobbi's calling card for prestige engagements as a sought-after backing vocalist. In October '74, Bobbi joined Allison and Janice Slater in the cheekily-named Hooter Sisters to release the one-off double-cover single, ''So Tough / To Know Him Is To Love Him''. Bobbi's other notable session contributions include backing vocals on Abigail's Top Ten 1973 hit ''Je T'Aime'', the classic La De Das 1973 album 'Rock & Roll Sandwich', work on 1973's 'Survival's A Song' by folkster Graham Lowndes and on 'Pity For The Victim', the 1974 solo release from John Robinson, and which featured most of the members of Duck. Bobbi also contributed vocals to 'Grass The Rock Musical'. She continued performing until 1976, when she left Australia, never to return.  Bobbi commented: "I left Australia in '76 and settled on a Greek island in the 80s. It was impossible for me to contemplate a lifetime of clubs (RSLs etc), so I bit the bullet and left. It was very hard, and strange not to be singing at first and I still miss it, but ..."
Bobbi did return to Australia around 2010 first of all living in Perth & becoming part of the music community there. Then around 2014 she moved to Bellingen on the NSW North Coast , and with partner, former La De Da's member Peter Hardinge (aka Roberts), they formed a new band called Random Verandahs and gig regularly throughout the North Coast. Thanks for the update Mick Robbins 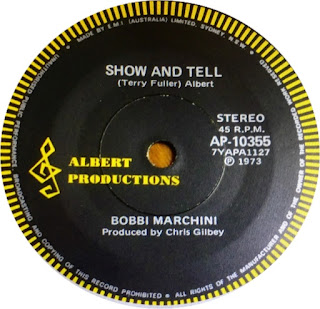