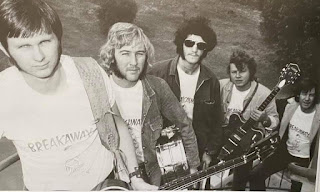 Perth band Breakaway was formed in the late 60s with the lineup of Peter Robbins on vocals, Ernie Rampellini on guitar, Joe Coci on keyboards, Eddy Podgorny on bass and David Waters on drums. They were popular on the Perth pub scene and built up a good following. In 1970 Paul Musson (ex Bacchus) would produce their first single ''Ra Ta Ta Ta'' on the Tasmanian label Van Diemen.
In 1974 saw a lineup change with Podgorny and Rampellini being replaced by Ray Van Ross (ex Bazaar) and John Lemin (ex The Troupadors) respectively. Soon after Reg Carson replaced Peter Robbins and the band would move to the east coast and join Ivan Dayman's Swinger Circuit. Dayman signed them to his Sunshine label and they cut a couple of singles, ''God Give Us Strength/I Don't Why'' and ''Love/Country Boy''. Interestingly they brought back Robbins to sing on ''God Give Us Strength. Both singles went nowhere and they returned to Perth at the end of 1975. The band recorded one more track in 1976 on the Indigo label ''My Girl/Gold'' and appeared on ABC's Countdown but again they saw no chart success. Breakaway went through a few more lineup changes, conducted another tour east before calling it a day in 1978.
Members
Peter Robbins (vocals), Ernie Rampellini (guitar), Joe Coci (keyboards), Eddy Podgorny (bass),
David Walters (drums), Ray Van Ross (vocals/bass), John Lemin (guitar), Reg Carson (vocals),
Dennis Broad (vocals), Steve Ramm (bass), Bob Anderson (bass), Ray Wood (drums),
Peter Nelson (guitar), Paul Reynolds (bass), Richard McDonald (keyboards), Dave Dunn (drums) 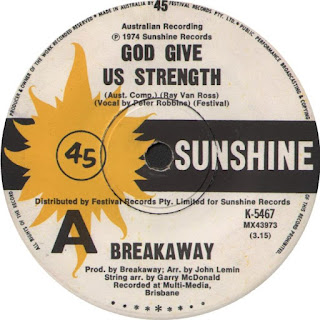