The Epics rose out of The Statesmen who recorded two of their own singles for HMV, "Beach Comber" (1963) and "Slow Stompin'" (1964). The Statesman also recorded with Roland Storm. In 1964, drummer Mark Rigney left and Billy Green (aka Wil Greenstreet) joined on guitar as the group became Roland Storm and The Epics and recorded a single, "Zip a Dee Doo Dah" (1964). When Storm left they became simply known as The Epics and released their own singles, "Caravan" (September 1964) and "Too Late" (June 1965). The Epics played many Sydney venues mainly Surf City in Kings Cross. The band also backed QLD singer Peter Wright on his 1965 release ''I Couldn’t Keep Your Heart / Once I Had Love'' on the HMV label. The Epics morphed into The Questions at the end of 1965. Duncan McGuire died in 1989 from lung cancer. Rory Thomas died from cancer in 2010. 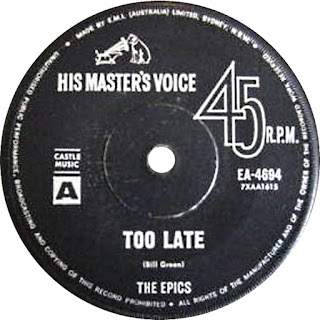